Home » Patmos accommodation » Where to Eat in Patmos, Greece

Where to Eat in Patmos, Greece

No matter where you travel, one of the first things on everybody’s list is to sample the food. Food tells you most of what you need to know about a culture in the first few bites. What food do they consider delicious and why? How do the people make and eat their food? Plus, who doesn’t love to stuff their face in a new country. We’ve already talked about some of the most popular, tasty foods in Patmos, Greece. Now let’s talk about some of the best places to sample the food of Patmos.

Pantheon is one of the most popular choices in Patmos. This may be because it’s located so close to the Monastery of St. John the Theologian, in the capital city of Chora. It may also be because of its reputation as “the octopus place.” And yes, octopus is on the menu, particularly the yummy appetizer of Marinated Octopus Salad. Pantheon takes full advantage of its closeness to the Aegean Sea, both with its aesthetic (whitewashed walls and sea blue chairs) and its variety of seafood. The sign outside reads “Seafood is our specialty.” Shrimp and scallops are popular keynotes of the entrees, and they offer a Taramosalata dip (caviar and olive oil), as well as traditional Greek cuisine, like Lamb Souvlaki. 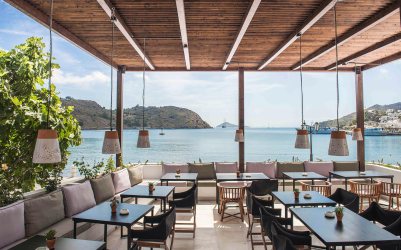 Art Cafe is a cafe and bar in Skala that celebrates both the food and drink of Patmos, but also the artwork. The walls inside are covered with art, and the table decorations and chairs are all beautifully crafted and artsy themselves. The owner of Art Cafe is actually German, and the cuisine is more international than strictly Grecian, but it’s known as a terrific place all over the island to relax and have a cocktail at the end of the day. It’s open late, and it includes rooftop garden seating that can’t be found anywhere else in Skala. It has a stunning view, overlooking the city and the Aegean Sea itself. 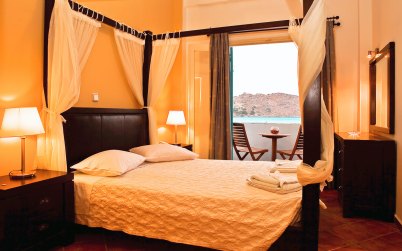 One of the rooms available at Chris hotel

As a popular tourist destination, there are a number of hotels in Patmos, Greece that are near places to eat or have some food accomodation within their facility. Chris Hotel in Patmos, Greece has its own cafe and bar with a beautiful waterfront view of the main port of Patmos in Skala. The cafe is open all day, and serves coffee, fresh juices, and even ice cream. It has a tranquil, relaxing ambience assisted by canopies and candles, open views of the waterfront, and padded seating all along the edge of the room. Chris Hotel’s cafe and bar is a perfect start and end to your full day of culinary exploration in Patmos.

When it comes to finding accommodation for your visit to Patmos, you’ll find the quality of service and convenience of Chris Hotel difficult to beat. It’s located in Skala, conveniently located near the best shops and grocery stores and close to the bus station. It offers rooms with views overlooking the water, the mountains, or their own beautiful garden. Book your stay today. The friendly, helpful staff at Chris Hotel can’t wait to see you.

By patmoshotels in Patmos accommodation, Patmos hotels on September 11, 2017.
← Museums in Patmos, Greece